Success Story: The Birth of the RightStuf Tattoo Machines -year 2012 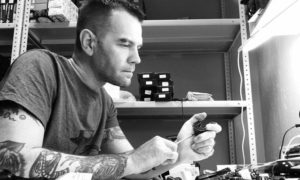 Success Story: The Birth of the RightStuff

We talked with Oleg Mozhey, the founder of the Right Stuff brand, which produces high-quality tattoo machines. This is a success story, doing what we love.

– Oleg, tell me how it all began? How did you decide to start manufacturing tattoo equipment?

– The Right Stuff brand was born in 2012 with a pilot series of its own line of tattoo machines. Until that moment, I was engaged in repair and rebuild of tattoo machines from other manufacturers, and it was rather a forced move.

As a co-owner of the studio and the owner of a tattoo supplies store, I undertook minor repairs of the tattoo machines of the studio masters and clients. As it turned out, neither the first nor the second either did not know how to do this, or did not want to be able to.

Then began the rebuild of cheap Chinese machines. I changed almost the entire body kit to a better one and tuned it according to my understanding. This was relevant for this country, in which the crisis was replaced by a crisis (Oleg works and lives in Minsk, Belarus – approx. Ed.). The financial situation of the craftsmen did not allow the purchase of foreign machines.

In parallel with this, I was engaged in self-training, watched a lot of videos in English and read tons of literature about tattoo machines, their assembly and settings. Since I am not a tattoo master, I had to spend hours additionally “pounding” artificial skin in order to understand how the machine works and on which settings certain techniques will be more effective.

Soon I realized that I was ready to produce my own coil tattoo machines.

And in 2012, 2 models were released: Liner and Shader under the Right Stuff brand. By those standards, for me it was a “huge” batch – 10 machines of each kind.

In 2015 was launched our first rotary tattoo machine . By that time, in the line of coil machines there were already 8 models on 4 frames.

Now under the Right Stuff brand 11 models of coil and 5 models of rotary machines, power supplies, tattoo machine grips and other products are produced.

We are focused on quality, so we are not in a hurry with the release of new products, Right Stuff is first of all reliability and quality.

– How are Right Stuff tattoo machines different from other brands? Is it true that you still build machines yourself?

– It is difficult to claim superiority over other brands when the market is saturated with offers. The main advantage is that the frames of our machines, completely milled i.e. made of one piece of metal, and not welded from two or more halves. This principle was originally laid down in the brand concept.

I always wanted to make sure that each of my machines are perfect, and it’s clear – it is not made “on the knee” in the garage from what was at hand. All frames are made on high-precision CNC machines and with very tight tolerances, which gives confidence in the quality of the machines produced. An important point is that I still do the final assembly and tuning of the machine myself.

– How do you assess the prospects of the market for coil tattoo machines amid growing demand for rotaries?

– I believe that the demand for rotary tattoo machines is slightly inflated. Since 2015, we began to produce rotaries, but coil machines predominate in the bulk of our sales.

And as practice shows, coil will live for quite some time.

– Who uses your tattoo machines and for what purposes? Are there famous masters among clients?

– Our machines are used by everyone – from beginner tattooists to professionals of the highest level.

Not so long ago, we received high praise from our permanent make-up artists for our Hornet Pen tattoo machine model, among them there are many “stars” of eyes and lips.

At different times, our machines worked and continue to work such tattoo artists as:

– In reality, there are many names, it is difficult to list everyone. Forgive me those whom I did not remember at this moment.

– You mentioned that your machines are popular among permanent makeup artists. Why?

– It is true, the beginning of work with permanent makeup masters was laid back in 2013 with the release of the model of the coil machine BONE P.M. “P.M” in its name says that the machine was originally sharpened for permanent makeup. The settings of the model are such that the machine has become softer and has acquired an extra long stroke, which is a comfortable setting for the single needle operation.